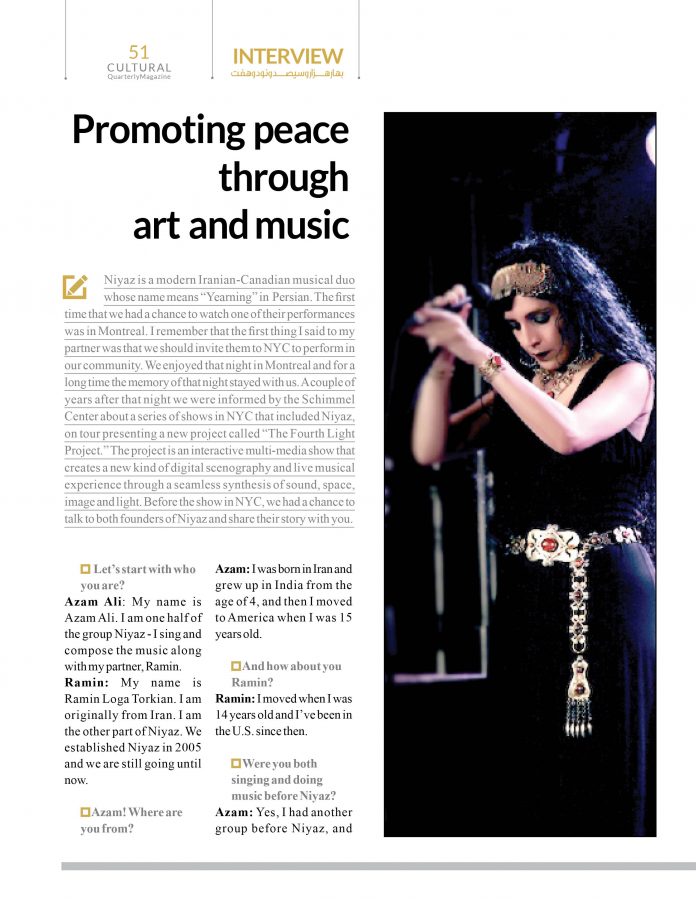 Niyaz is a modern Iranian-Canadian musical duo whose name means “Yearning” in three Central Asian languages. The first time that we had a chance to watch one of their performances was in Montreal. I remember that the first thing that I said to my partner was that we should invite them to NYC to perform in our community. We enjoyed that night in Montreal and for a long time the memory of that night stayed with us. A couple of years after that night we were informed by the Schimmel Center about a series of shows in NYC that included Niyaz, on tour presenting a new project called “The Fourth Light Project.” The project is an interactive multi-media show that creates a new kind of digital scenography and live musical experience through a seamless synthesis of sound, space, image and light. Before the show in NYC, we had a chance to talk to both founders of Niyaz and share their story with our audience.

Q: Could you please introduce yourselves? Your names, your backgrounds?

Azam Ali: My name is Azam Ali. I am one half of the group Niyaz – I sing and I compose the music along with my partner, Ramin.

Ramin: My name is Ramin Loga Torkian. I am originally from Iran. I am the other part of Niyaz. We established Niyaz in 2005 and we are still going until now.

Q: Azam! Where are you from?

Azam: I was born in Iran and grew up in India from the age of 4, and then I moved to America when I was 15 years old.

Q: And how about you Ramin?

Ramin: I moved when I was 14 years old and I’ve been in the US since then.

Q: Were you both singing and doing music before Niyaz?

Azam: Yes, I had another group before Niyaz, and Ramin had his group also, Aksim of Choice, another group that he was the musical director of. And then we decided to create a project together in 2005.

Q: And how did Niyaz come to be? The idea, the name – could you walk me through the process?

Azam: Well, we wanted to create something modern that had roots in our culture. We wanted to tell the story of our generation of Iranians, who migrated here (to the US) and were caught between two cultures. The culture of our parents and the place we were born, but also now we were part of a very different country and society and how we could create some kind of harmony between these two cultures that are part of who we are. And for the artist, that is the best way to do it – through their art. That’s why Niyaz became a platform to create modern music that was rooted in tradition, culture and poetry and folk songs and all of that, that’s where the idea of Niyaz came from. Our music is either based on old Sufi poetry, not just from Iran, but also from other places outside of Iran, and also we do new editions of folk songs, specifically focused on religious and ethnic minorities inside and outside of Iran in the Persian Gulf area, and also in Indian subcontinent, because the message was to kind of show, if we want peace outside of our geographical borders, we, first need to have them within our own geographical borders and there are a lot of ethnic and religious minority groups that have suffered oppression inside Iran, in Turkey, everywhere that you are looking in the Persian Gulf area. We wanted to kind of highlight the art and spirit and tradition of the minority cultures. ….. 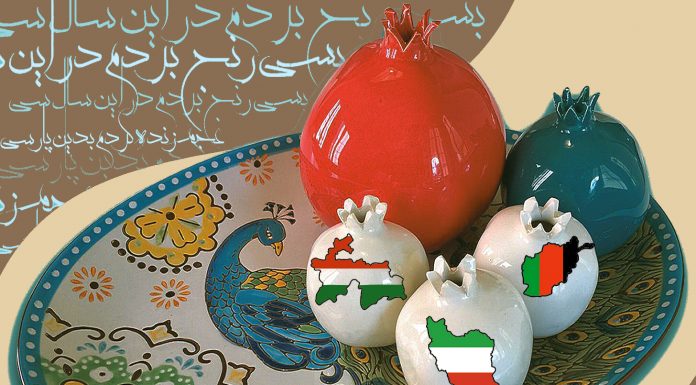 After 9 years working on Shahnameh, It’s time to move on!